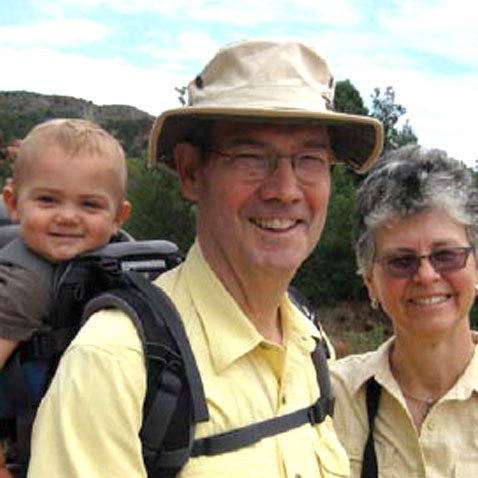 In mid-August 1992, Joanne and I were driving back to Arlington, Virginia, with our 11-year old daughter, Charlotte, from our second trip to Nature Camp. As we were cruising up I-81 in steady traffi c at comfortably above the speed limit, Charlotte called out from the back seat, “Daddy, Daddy, stop.” “Honey,” I replied, “I can’t stop. Is everything all right?” “Daddy, I want to show you something.” After learning there was no emergency, I pulled over at the next safe widening. Charlotte jumped out of the car, ran up the bank, came to small purplish flower, and said, “Look, Daddy. It’s a Bergamot. You can tell by its square stem that it’s a member of the mint family.” I was blown away. What had happened during those two weeks at camp? What sparked such interest and energy? That summer proved to be the first of my many happy associations with camp and campers.

I grew up as a Foreign Service brat, traveling every couple of years to a new home abroad, and while I’d gone hunting and fishing with my father in some exotic places, I’d never really learned about ecology and environments as systems. I had watched spiders catch insects, birds catch fish, and even a lion catch an antelope, but I didn’t have much wider context for living, let alone inanimate, things. My formal education was in engineering and political science. My career was in the Army. My curiosity, however, was in the natural world.

These interests found expression at Nature Camp. For the first time I could explore nature in an organized way at Adult Sessions, which Joanne and I started attending some years later. We signed up for evening and weekend classes and outings with local DC area naturalist groups on everything from birds and insects to tidal marshes and geology. Joanne’s interests and expertise grew, as she became a Master Gardener and a Master Naturalist, including serving for over five years as Arlington County’s horticultural technician. One can’t be married to someone who has a passion for nature without your own horizons being expanded, and we have shared many happy hours hiking, birding, and doing the “botanist’s shuffle,” whenever and wherever we can.

So I was never a camper as such, but I did go to Nature Camp as often as I could, both to help out during service weekends and to all end Adult Sessions. It was great fun to be with other like-minded people, doing work to improve camp, learning new facets of our natural world, gathering to sing in the evenings, and even playing bass in a beginner’s string band. On one of these visits in 2004, Walter Mehring asked me if I wanted to join the board of the Nature Camp Foundation. I accepted, but guess I didn’t do enough due diligence on what might be involved, because the next thing I knew I was the only nominee on the ballot that fall to be NCF president. That opened a new and very fulfilling nine-year chapter in my association with camp.

What started as my being with a relatively quiet alumni organization quickly turned to more active engagement once the Virginia Federation of Garden Clubs dropped its support of Nature Camp in the face of looming, costly, and needed upgrades. You know how the story ends – happily – but one of the most energizing meetings I have ever attended came on 29 October 2006, when 200 people packed into the LS Building and said, “We can do it.” And we did, a deeply gratifying effort. That communal backing has always been a source of inspiration for me.

Such energy and commitment has manifested itself in almost every association I’ve had with camp over the years. Camp has always been led by a broad spectrum of dedicated individuals, young and old, who have taken an abiding interest in sharing their knowledge and skills with others, also young and old. It has been my joy to have been a part of that activity.

Quite apart from my own personal involvement, Nature Camp has been a greatly enriching factor in the lives of our whole family. Joanne and I first learned of camp through Evelyn Byrd Sargeant, a camper and counselor in the 1960s and 1970s. She had married my older brother, Churchill Hutton, and they also live in Northern Virginia. As a result, not only did their four boys go to camp, as well as our two girls, but also the three children of my younger brother, Peabody, all of whom had grown up in Hong Kong. What made Nature Camp especially important, however, was that many of these nine overlapped at camp during a formative phase in their lives when they could be together without their parents. During one summer, there were five Huttons simultaneously at camp as counselors or campers. Camp survived the onslaught, and it united the cousins in a shared joyful experience.

Yes, Nature Camp and its community have been extraordinarily positive and fulfilling forces in my life, as well as in the lives of our next generation. We look forward to continuing that happy association in the years ahead.