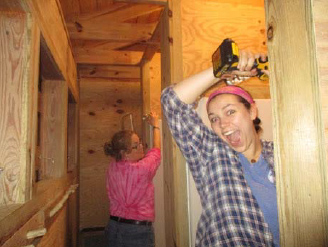 Spring Service Weekend 2018 was a resounding success.  There was a threatening forecast of heavy rain for the entire weekend, but the weather was not as bad as expected.  The rain that did fall did not discourage the 64 intrepid adults, and 18 adventuresome minors, from doing things all over camp and in the surrounding woods.

The dead brush of the past winter was cut up and hauled off to piles, transferred to the truck and moved to its final resting place in the woods.  This job involved almost everyone at one stage or another.  There were big pieces for those who wanted a bit more exercise and smaller pieces for everyone else.  Camp, in the middle of the forest, will eternally need tree parts and brush moved.  That is a skill any of our volunteers have!  Those of you who wonder how you can help at a Service Weekend, look no further than moving brush during the day, then enjoying a hot shower before great food at dinner and fun music after the sun goes down.

In the library there was a great inventorying and renumbering of the books.  A compendium of the current library volumes was created.  The camp library’s chosen numbering system was maintained but the books were better grouped together by type and assigned new consecutive library numbers.  Additionally, the best use of library shelf space was addressed.  Organization of one of our best resources has been vastly improved.

The young people kept busy finding numerous dedication plaques around camp and in the surrounding woods; a surprising 46 plaques were located and described in a spreadsheet.  Moving forward, these plaques will be cleaned and refurbished.

Many upgrades, repairs and odd jobs were done around camp.  For example, windows and screens all over camp were assessed and documented for future repair and improvement. In addition, all the kitchen, infirmary, and most of the staff house fluorescent light fixtures were replaced with more energy efficient LED fixtures.  The installers managed to get the kitchen job done without a single screw, piece of wire, or light fixture being discovered in anyone’s dinner. In the boy’s T-house there had been a shortage of functional “seating”.  One toilet was repaired and reseated and another was replaced.  The shower curtains were moved further into the showers in both T-Houses so now there will be less water on the floors. New shelving was installed in the canteen.  The large pieces of wood that had been stored behind the garage were relocated behind the museum so that all the camp wheelbarrows could be mounted to the garage wall.  Now the wheelbarrows look like an art installation with each one bearing the marks of its camp history, and now they are out of Ventry’s way in the garage!  Trees were removed for safety or pruned for their health and from the trunks of a couple of white oaks, new bench material was saved.  The remaining old floor joists under the staff house were replaced.  Camp’s battle with the autumn olive invasion was rejoined along the road and camp paths.  The garden was cleared for spring planting, repairs were made to the porch screens behind the infirmary.  A new light was installed to light the play field area.  Spring cleaning was done in all the living and social areas.  So much was accomplished!

Mixed in with all this productive labor was the core joy of simply being in this special place, supporting a mission we all share, and visiting with old and new friends.  Callie Houghland, who has been serving in the Peace Corps, gave us an interesting presentation on her experience in Mexico.  She won the prize this time for the farthest distance traveled to come to a Service Weekend!  Every evening, there was music and time to chat.  Mike Meads donated a pig and we had an incredible barbecue dinner on Saturday.  As always, the food was plentiful and really delicious!  Many thanks to Nell for her tireless commitment to our culinary satisfaction and accommodation of our assortment of dietary restrictions!  When I think of Service Weekend, my mouth says “YES, I’m ready.  Let’s go!” 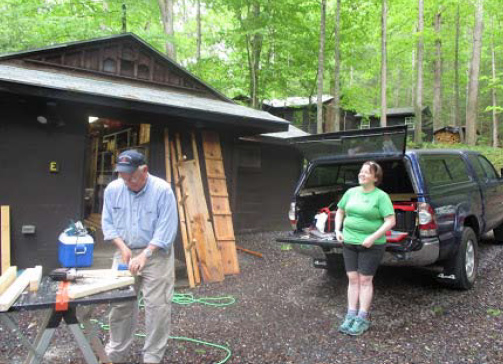