By Sandra HaysletteMay 4, 2018 No Comments 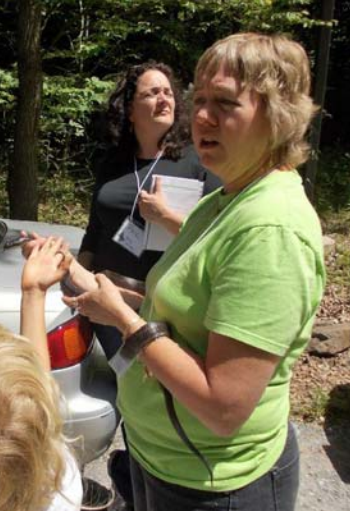 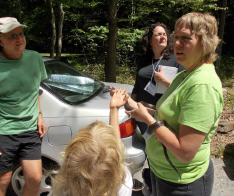 If you have shown off your favorite Nature Camp t-shirt design, been warmed up by a delicious meal at a Service Weekend, looked for friends and memories in the Afterglow, or enjoyed a jewelry or herpetology class at Adult Session – chances are you have been touched by Nell Jefferson Fredericksen. The insatiably curious scientist-artist-cook-teacher has played so many roles in the Nature Camp community that even she has to work to remember them all, and she now brings her multiple talents, and forty-three-year passion for camp, to the position of President of the Nature Camp Foundation.

Nell first came to know Camp through her mother’s garden club in Danville. A scholarship recipient, she attended Fourth Session for the first time at age 11. When she arrived for her first Camp session, she was not yet a “reptile nerd”. In fact, she was not thrilled to find herself stuck with herpetology as a major class. During the class sign-up, which was at that time a mad rush, first-come, first-served system, she was at the nurse for allergy medicine. When she returned to the L.S., herps were the only open option remaining. On the first major class day, she and a gaggle of boys clustered around a cage in the education building. Unable to see, she circled to the back and instructor George Tolley handed her Henrietta, a pine snake (“a beautiful, beautiful snake,” she remembers) – and thus her lifelong love of all things herpetological was born. Many of us have a mental image of Nell delivering an impromptu lecture outside the bunkhouse with a snake wrapped around her arm or a salamander on her palm. She currently teaches for four Master Naturalist chapters and is an adjunct instructor at Ferrum College. Thank you, Henrietta!

From this auspicious start, Nell became an 8-year camper and worked five years as a counselor. Nell taught everything from astronomy to entomology and of course… herpetology. She remembers with fondness her stint as canteen operator (and appreciates a few lessons in home brewing she learned from then-caretaker Sam Lavender in the back room of the canteen).

As it has for so many people, Camp became like family for Nell. She found herself transformed by the chance to be smart without social backlash, to get muddy and messy, and above all bond with a cohort of likeminded people in what she terms her “awkward years.” The association of Camp and family gained an added poignancy when she lost her father to cancer at 16. When she arrived that summer, she heard Colonel Reeves summon her with his typically gruff voice: “Jefferson, get in here!” When she entered the staff house, she got the warm, loving bear hug she needed. Colonel’s deep kindness and concern for her in that moment stands out in sharp relief in her memory. 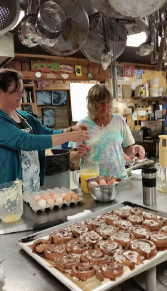 While most camp alumni share this sense that camp “is family,” not everyone can say that they’ve actually formed a family of their own from Camp; Nell can. Her husband, Todd Fredericksen, came to Camp to teach archaeology the summer after he graduated from the Virginia Military Institute. In Nell’s own words, she “chased him and got him,” and their marriage followed a few years later.

Nell attended Randolph-Macon Women’s College, majoring in Biology and minoring in Chemistry. Her master’s study at Virginia Tech involved reptile physiology (energy expenditure in skink tail regeneration, which she insists “is too geeky for this article”), and she was headed to veterinary school with a research assistantship when her life took an unexpected turn.

A few months before she was to start her vet program, Nell enrolled in some art classes at a local community college, taking metalsmithing, pottery, and stained glass. The classes tapped a well of talent and curiosity. When her graduate advisor called two weeks before the semester began with the news that her funding had evaporated, Nell immersed herself in her new passion instead and became an artist.

Excelling in both pottery and metalsmithing, Nell now exhibits her work in 5-6 juried shows per year, partners with five galleries, as well as works on many commissions. An Artisan Center of Virginia Juried Master Artisan, Nell teaches workshops at the Floyd Center for the Arts. Her designs, in both pottery and jewelry, frequently reflect natural themes and shapes. Her classes are among the most popular at Adult Session every year. If you are curious about her work you can check out her website – www.nellfredericksen.com.

Nell describes herself as an “anomaly” as an artist. She is as comfortable with pottery as she is with metalsmithing. Nell finds that the two disciplines “keep each other fresh,” enjoying both the elasticity of clay and the “whacking and torching” she can do with metal. Even if you haven’t seen her jewelry or pottery designs, you have certainly admired her artwork; for thirty years, she has created the intricate, lifelike scenes of local wildlife and habitats for the Nature Camp t-shirt. It is a true labor of love for which she has never asked for compensation, and the anticipated unveiling of the new, highly-secret design is a highlight of the Camp year.

While some of Nell’s camp roles are highly visible, she has also done much behind the scenes. During Camp’s transition in ownership from the Virginia Federation of Garden Clubs, she served as secretary of NC Acquisition (now Nature Camp Inc.), formed to oversee the operation of Camp. Nell then transitioned to the NCF board where she spent nine years as Communications Chair and editor of the Afterglow. In 2009, when the need arose for someone to head up the kitchen crew for Service Weekends, Nell graciously and enthusiastically grabbed the reins as head cook (and she thankfully has no plans to retire from this role, despite taking on new responsibilities as NCF president). For her myriad and invaluable contributions to Camp, Nell was inducted into the Roll of Honor in 2010. 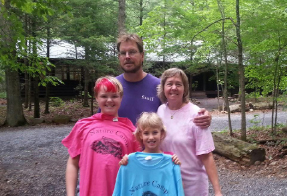 One of Nell’s newer roles is that of mother-of-campers. Of course, her children Neil and Lily have been to Camp since they were in utero, and they emerged early as lovers of the Nature Camp experience. Many of us have admired Lily’s caterpillar collection and delighted in seeing a seven-year-old poring over a dichotomous key – all to be sure she could gather the correct foods for her specimens. Neil just became one of the youngest Certified Virginia Master Naturalists. Nell loves watching the two of them, both current campers, making their own unique Camp stories.

Multiple opportunities to serve Camp have been an excellent match for Nell’s natural energy and curiosity (“I hate being bored,” she notes). In Camp, she knows she has a mission with profound importance. Camp’s impact on people goes beyond its gifts of learning about the natural world– “it’s life lessons, a pathway to what you want to do and what you want to be” she says. Those lessons endure and continue to inspire campers’ lives – as evidence Nell cites the close to 3000 loyal Camp alumni and others who support the Nature Camp Foundation.

Everyone who knows Nell wonders at some point how she does all of the things she does so well. Her explanation is simple: she doesn’t like limits, and “you never know what you’re going to learn or do until you try it.” If the sentiment strikes a chord with the Nature Camp family, there’s a reason. The space, time, and support to grow are doubtless Camp’s greatest gifts to its participants. Small wonder that the new president of the Nature Camp Foundation, nurtured on the banks of Big Mary’s, is determined to never stop learning, experimenting, and growing.