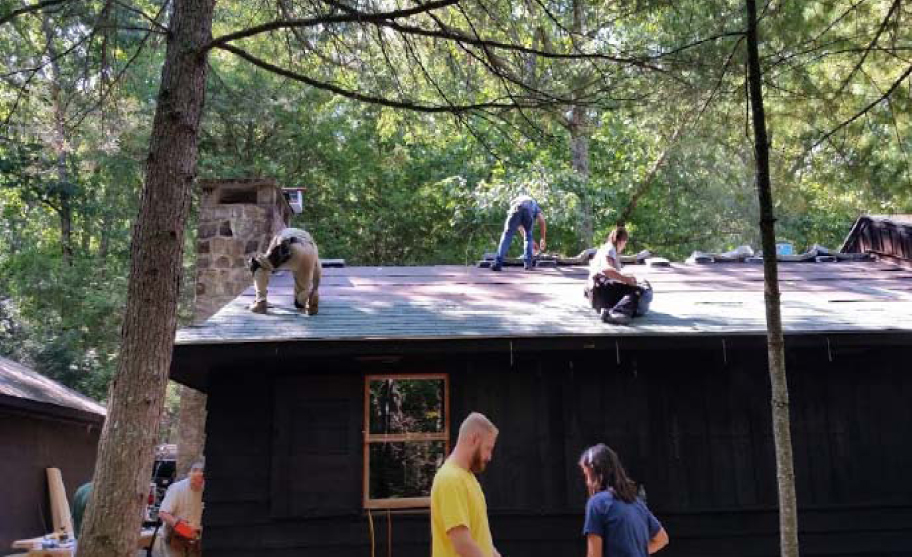 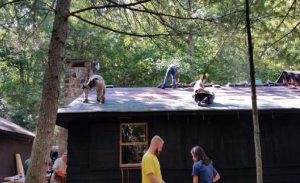 Fall service weekend 2014 took place September 19th- 21st and was attended by 95 dedicated volunteers! Camp benefits immensely from these service opportunities, saving tens of thousands of dollars in labor costs associated with the various projects completed. As always, everyone enjoyed time at Camp catching up with old friends, meeting new ones, eating wonderful food, and enjoying each other’s company.

Re-shingling the roof and reinforcing floor joists in the education building were some of the larger projects of the weekend.

Volunteers spent hours upon hours removing shingles, repairing the roof, replacing the shingles, and cleaning up around the building after the job was done. No Nature Camp roofing project would be complete without the threat of rain and a few of us found ourselves carefully placing tarps on the bare roof just after nightfall on Saturday to avoid damage to the building and its contents from passing showers. The joists under many of the buildings have been “sistered” (reinforced) with new pressure-treated lumber installed alongside the existing, untreated joists. This process is always a challenge and places a few volunteers under a building, the library in this case, for long periods of time, sending out measurements for cutting, and wrestling the new joists under the building and into their new place. 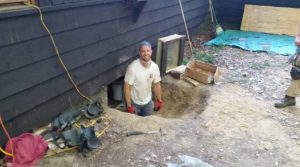 Siding on the Educational Building was also replaced because of damage done by carpenter bees. This new siding required treatment with carbolineum to preserve the wood and to match the existing siding on the buildings around camp. The path in front of the boy’s bunkhouse saw some improvements through the placement of new logs to line the path and retain new gravel. Some of the trails around Camp were cleared a bit including the trails to Table Rock and Buttermilk Springs – favorites during summer recreational periods. The drainage ditches beside the pool were cleared as well to direct water off the roads and away from Camp. Gravel for the tether ball court was
contained with half-buried logs so that its spread would be decreased. It sees heavy use during the summer! The staff room in the girls’ bunkhouse had new shelving
added and lighting was relocated in the boys’ bunkhouse staff room to remove the “strobe light” effect that was caused by the motion of the ceiling fans. Hangers were
added in many places around Camp for brooms that lacked a good storage place. Invasive plants have made their way in to Camp and volunteers spent many hours removing these invaders to allow for our local species to flourish. The front office saw a face lift with the addition of cork tiles around the Tile Donor wall, not only
to make it look much better but also to allow that space to be used for posting photos.

One highlight of the weekend was the Saturday evening commemoration of the Nature Camp Foundations 25th year of existence. Before dinner, a slide show presentation was made by the History Project leaders, Katie Hoffman and Nancy Lowry. Dinner included the traditional gourmet pizzas followed by cake and ice cream. 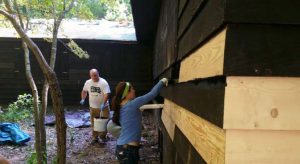 Service Weekends provide the camp community with an opportunity to come together and enjoy Camp while providing a remarkable savings in labor costs. It’s estimated that labor for the roofing and floor joist replacement of the Educational building would have cost 10 to 15 thousand dollars alone had the job been contracted out to a builder. Those funds saved can now be utilized for scholarships, supplies, and materials for future projects.

I’m honored to have been chosen to serve NCF as the Service Weekend Chair. I’ve been privileged to have had the time to get to know much of the Camp family and if I haven’t, I look forward to meeting you soon. I came to Camp originally in 2013 as a member of the summer staff. In only a few short months of educating future environmental stewards I came to realize I would regularly find myself at Nature Camp for the rest of my days in order to help ensure the future of such a wonderful place. Please contact me with any questions regarding Service Weekends you may have. I look forward to seeing you soon. 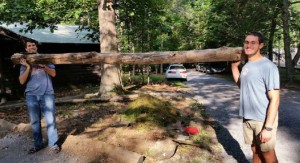 Watch your inbox for updates regarding the upcoming Spring Service Weekend (May 15-17) and the exciting projects that will be completed then.
– Corey Basham, NCF Service Weekend Chair