The Successful Campaign for Nature Camp Closes Out 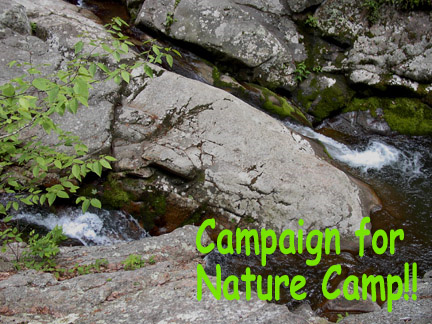 When the Virginia Federation of Garden Clubs withdrew its support for Nature Camp in the fall of 2006, an immediate effort was undertaken by the Nature Camp Foundation to try to raise funds to do the needed renovations that the VFGC hadn’t been able to afford. That capital campaign was called The Campaign for Nature Camp, headed by Anne Rottenborn Balto (serving simultaneously as the founding President of Nature Camp, Inc.), to seek pledges of financial support over an initial three-year period, later extended to five.

Over the course of the campaign, a total of 542 donors pledged more than $622,000. Funds came in big amounts and small, eventually totaling over $619,000, a shortfall of less than
one half of one per cent, a truly phenomenal response rate.

The campaign raised enough to fully cover the costs of the capital improvements Nature Camp needed. Over half million dollars went immediately into upgrades for water, sewer
and electrical systems to make Camp safer and better. These monies allowed Camp to operate without pause during a trying time of transition. Then, a few years later, the balance allowed Camp to continue major capital improvements with a new well system and kitchen upgrade despite the global economic downturn. These funds also allowed the separate and ongoing annual giving program to fund more routine expenses within normal budgets

A deep and lasting debt of gratitude is owed to the loyalty of our many donors who gave so generously to this campaign. You ensured that Nature Camp could not just survive, but thrive. Because of your strong support, this capital campaign is now officially closed.