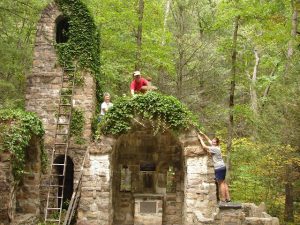 One of the most treasured landmarks at Nature Camp is the Reeves Memorial Chapel.  Here is an excerpt from the Nature Camp website’s description of facilities at camp:

“A simple yet elegant stone chapel is nestled amid trees near Big Mary’s Creek, which runs along the northern boundary of Nature Camp. The chapel and most of the other buildings at Camp were built in the 1950?s and early 1960?s by Ollie Groah, a resident of nearby Raphine. The chapel was renamed and rededicated in 1997 as the Reeves Memorial Chapel, in honor and memory of Col. John H. Reeves Jr. and Trudy Reeves. Colonel Reeves was director of Nature Camp from 1972 through 1996. Non-sectarian services, which reinforce the spiritual values that Nature Camp seeks to instill, are held in the chapel on Sundays and are led by the counselors. The final event of each session is a brief chapel service on Saturday morning.”

Most of you are used to seeing the chapel stones covered with English ivy.  However, English ivy, while picturesque, is non-native and becoming invasive (already declared so in the Northwestern states).  It is also incredibly destructive to masonry and mortar. Being good stewards of Nature Camp’s resources includes the inspection of the condition of the mortar holding together the stones of our lovely chapel.  To accomplish this inspection, the English ivy must be severely cut back, which was done in the fall of 2012.  This will permit sufficient dieback of the quite robust vines in time for removal of the growth at Service Weekend in May 2013.   Bottom line, our lovely, shaggy chapel will appear a bit scantily clad for a year or so.  If you happen upon the chapel in a visit to camp this year, please do not be dismayed at this condition, but take a moment to appreciate the beauty of chapel in its unadorned state.  The mortar between the chapel stones will be repointed, and if more aggressive repairs are required, we’ll plan for that as well.