By Corey BashamFebruary 26, 2013 No Comments 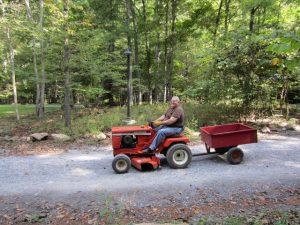 The weekend of September 13 – 16, 2012 was the 50th official Service Weekend sponsored by the Nature Camp Foundation. I consider Saturday August 12, 1989, when Walter, Peter, and I rebuilt the old reed organ, the first. Ben McIlwaine played the organ the next morning on the porch of the LS while folks sang some of the old Nature Camp favorites.I have attended 49 of the 50 Service Weekends and am continually amazed at what we can accomplish in a weekend.

The three major projects during this gathering were the Staffhouse roof, the BBH floor joists, and a big landscaping project below the new well head that is uphill from the Canteen. The pipes from the new well are buried underground straight downhill from the well to the Canteen, so it was a perfect spot for some really impressive erosion during the rainy summer sessions.

Many folks hauled rocks to form a number of waterbars to divert rainwater off into the trees, and then spread wood chips and transplanted ferns, trees, and other woodland plants into this area. They did a wonderful job, and in a few years it will look like a natural woodland. We started reshingling the Staffhouse this past September. On Thursday, 7 of us removed two layers of old shingles from the roof above the office area.

Many thanks to Beth, Cecily, Flip, Jason, Matthew, and Ventry for arriving early to tackle this first part of the project. Charlie had the Camp dump truck in place to receive the old shingles. We also reshingled the Outhouse (laundry building) at the same time. In May 2013 we will reshingle some more of this roof. The roof has been changed several times over the years, when a closet and 2 bathrooms were added. This makes the next portion of this roof more complicated, and because of these complications, I don’t think we can finish the roof until September of 2013.

Many of the buildings at Camp are 60 years old, so the problems will never all be fixed. We just plug away at them each time we meet. We finished reinforcing the floor system under the boys’ bunkhouse. That took 15 hours in May 2012 plus 17 hours this past Service Weekend. It is a very dusty, rocky, and cramped area. It is difficult to find anywhere to sit up. Much the work is done while lying on your back. I have never been more tired or more grubby in all of the Service Weekends that I have attended. Despite that, it was great great fun! We had a really good crew under there. Thanks to Alia, Cecily, Graelyn, Jason, Mack, Maggie, Reid, and Walter. Walter came out from under the BBH as fresh as a daisy. I don’t know how he did that. 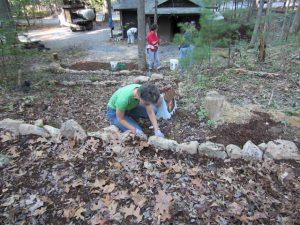 We removed a great deal of brush and weeds from around Camp. The area uphill from the Infirmary and GBH received some much-needed attention. We shoveled some gravel, we replaced some bug-eaten fascia boards, and we smeared some carbolineum on some bare wood. The hero of the weekend would have to be Ventry again, who arrived on Sunday a week early and left the following Sunday morning. The Nature Camp chiggers were glad to have Charlie and Ventry as a snack while they cleared brush from the area below the Caretakers’ house, during the week before anyone else arrived.

The food was fantastic, which has become the norm. My favorite was the deep dish pizza on Saturday night, and of course, all the desserts. Nell headed the kitchen crew with much help from Katie, Kim, Amy, Penny, and a bevy of Huttons. Some folks played music in the LS on Friday and Saturday evenings

Amy K Gonzales has invited you to look at her photos from this past weekend. Amy has the photos posted at the following website. She spent loads of time gathering names, and for this I am extremely thankful. I spent a good deal of my time under the BBH, so didn’t get a chance to see everyone who attended. I could not have compiled the list of attendees without Amy’s and Art’s diligence.We started reshingling the Staffhouse this past September.