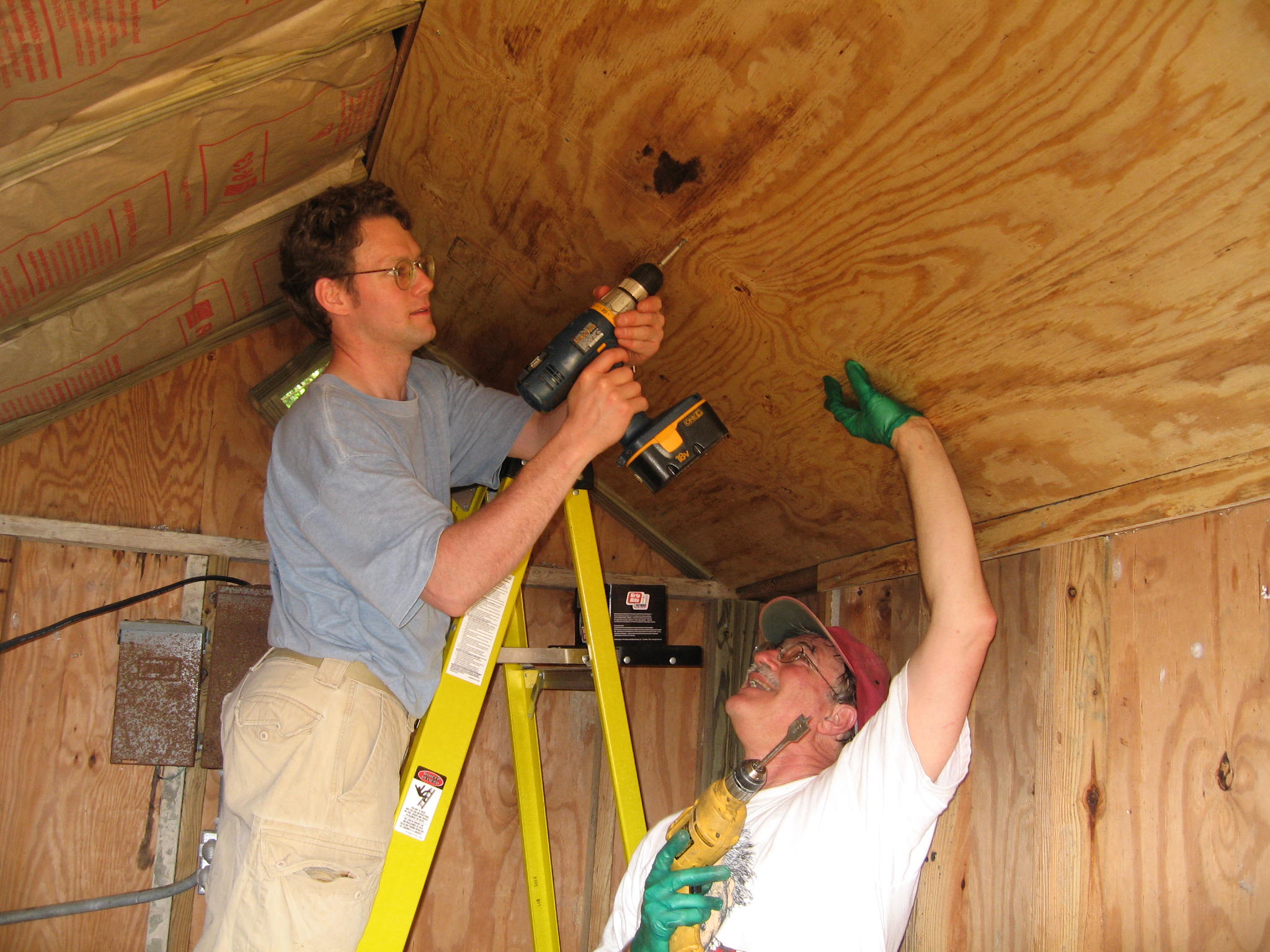 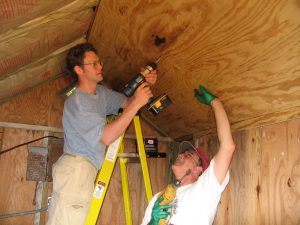 We finished reshingling the GBH the third weekend in May this year. We had planned to do the roof during 4 Service Weekends, but we had so many experienced roofers that we nearly completed it in only 2 Service Weekends. We just have a small dormer roof over one of the windows left to complete that roof. The corner of the roof in the valley to the right of the porch was badly in need of repair and there were a few sheathing boards that needed to be replaced, but most everything went quite smoothly. Amber, Coleman, Riley, Flip, Lyt, Mike, Matthew, Charlie, and I removed the old shingles and roofing felt on Thursday so we could determine the extent of the rotten wood that needed to be replaced. It rained during the weekend, only lightly, but we can still say that we have never roofed any building at Camp without rain.

We installed 6 ceiling fans up in the trusses of each bunkhouse. Mike Meads wins a hero award for his diligence in ensuring the fans arrived at Camp on time to be installed. I heard that the bunkhouse ceiling fans worked well, and the very loud exhaust fans remained silent during the regular session of Camp. I suspect the ridge vent that we installed on the GBH while reshingling the building also helped to reduce the heat in that building this summer.

We hauled loads of brush and cleaned up a mess that was produced by the power company. We also worked on the road to Buttermilk Spring where the power company cut big ruts in the road getting their big truck through the stream. We replaced some shutter hinges, smeared more sheetrock mud in the Staffhouse, replaced the boards on the Staffhouse porch near the garden, reset the metal signpost down by 608 with 240 pounds of concrete mix so it would be more difficult to steal, replaced some ceiling tiles in the Museum, removed the old rotten shutters from the Caretakers’ house and swept the roof and cleaned the gutters, and generally got Camp ready for the regular summer session. Eric Latham and Mack Carr win hero awards for cleaning and power-washing the inside of the big white water tank.

The food was fantastic as usual. Nell was in charge and had lots of help from Kate, Amy, Art, Cathy, Ginna, and Kim. The pizzas and desserts were especially wonderful. We played music in the LS on Friday and Saturday evenings.

Of the 58 folks who attended, 5 had never been to a previous Service Weekend and 4 folks were on Staff this past summer. We have now had 343 folks who have attended at least one Service Weekend.