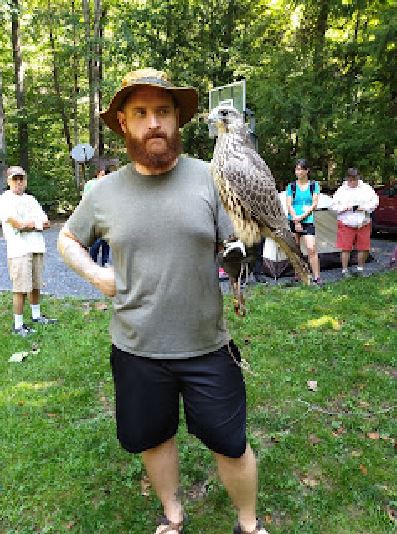 At Nature Camp, I had the immense pleasure of meeting Gucci, a 19 week-old falcon, and his owner/handler, Corey Basham (Licensed Falconer). Corey purchased Gucci for use in falconry, which is an ancient method of hunting using a trained bird-of-prey such as a falcon or hawk.

Early evidence of falconry has been found in Mongolia, Iran, and elsewhere in the middle east between 4,000 and 6,000 BC. Some experts claim the practice is even older, but by 2,000 BC it was a well established hunting method. Thousands of people in the United States continue this practice today.

As part of this year’s adult session at Nature Camp, Corey offered several demonstrations and educational sessions with Gucci, his current falcon. Gucci is a captive born hybrid mix of Gyrfalcon and Saker falcon, mostly Gyrfalcon. The Saker falcon hybridization is to give her more tolerance of hot weather, as the Saker falcon comes from the middle east. Gyrfalcons can be found in much of Canada and the northern US. She is fertile and able to reproduce.

The Gyrfalcons (Falco rusticolus) are the largest true falcon in the world. They can fly up to 68 miles per hour! In captivity, Gyrfalcons can live over 20 years. Falcons roost on cliffs and make a low-effort nest called a scrape because it is usually just scraping rocks together. They may also use abandoned nests built by other species.

Falcons are primarily bird predators, so Corey will use her to hunt ducks once she is fully trained. She can see a duck from over a mile away and reach speeds of 100 miles per hour when attacking. When she strikes the duck, she will close her feet to make fists that will stun the duck. She may also bind to a duck in flight and bring it down to the ground. Hunts happen in the winter, During the summer, Corey does educational programming with Gucci. He feeds her her quail, chicks, and mice. She currently weighs around 1200 grams, which is just over 2.5lbs.

When traveling, she wears a hood which helps her feel calm. During the day, Gucci is tethered to her perch outside, unhooded, and is subject to the elements. It is important that she gets sun and rain to maintain her health and hygiene.

Corey is currently working with Gucci to strike a baited lure on a rope called a creance. After she has good reaction time and consistently returns immediately, she will be trained to fly high up using a drone, so she can gain speed and have an advantage over the ducks when they are flushed.

Once Gucci is fully trained she will be able to fly off-leash. Falconers have to keep a close control of the weight of the falcon to maintain the working relationship. She will be fitted with a telemetry device that will track her and aid in recovering her if she is lost.

Corey works with additional birds other than Gucci. Right now he has a barn owl that was raised by another falconer after being found when it was too young to care for itself. He plans to release the owl to the wild after it has proven that it is able to hunt on its own. In the past Corey has had red tailed hawks, a harris hawk, and American kestrels. Licensed falconers are permitted to capture up to 2 birds-of-prey per year from the wild, although there are rules about what species are allowed to be captured, and it is rare that falconers take more than 1 bird a year from the wild, if that many. If a wild bird is captured for falconry it must be less than a year old or it is released immediately as required by law. Corey released a red tailed hawk after working with her for 3 years, and has had others for only 1 year.

Gucci is a working animal, not a pet. Corey will keep her and work with her until she is no longer able to work, and then she will go to a propagation center to take part in a breeding program, or she will be donated to an educational organization that can care for her. She is not releasable because she is a captive born falcon.

Falcons can work for over 10 years. Corey takes into account the ethics of keeping a bird-of-prey captive and consistently asks if what he is doing with these birds is sustainable for the species involved, and if it seems enjoyable in the long run for the individual bird as well.

Gyrfalcons are not a social species and generally after Gucci eats she is content to just sit and enjoy the day. She does not display any signs of distress or exhibit any self-destructive behaviors and usually seems quite relaxed and content. When a falcon is comfortable it will display behaviors such as rousing, which is when they fluff up all their feathers and shake them into place.

She is safe from predators, she is fed consistently, she gets regular exercise and once fully trained she will be able to hunt as she would in the wild. It’s better than the zoo – it would be like taking a lion to the savannah 3-5 times per week so they could hunt. Falconry has taught Corey that some things cannot be learned from books – you need patience and experience working with an animal like this.

Folks interested in Falconry should contact their state falconry association and research the many texts
regarding falconry in general. A recommended book, for more information, is As The Falcon Her Bells, by Phillip Glasier, for an enjoyable read that contains some technical details and an overall good description of training and hunting with these birds.

If you are interested in becoming a falconer, by law you need to do a 2-year apprenticeship and get a license before you can own a bird-of-prey. These websites have more information for people interested in becoming a
falconer:
https://www.n-a-f-a.com/page/What_is_Falconry
https://www.pbs.org/wnet/nature/raptor-force-history-of-falconry/
http://www.themodernapprentice.com/glossary.htm

Editor’s Note: Corey Basham is a former Nature Camp counselor, and has been involved with Service Weekends, Adult Session, Fall Hike Day, and retained strong ties to Camp over the years. Corey has been an important player as well on the NCF and NCI boards in recent years. He came first to NCF as Service Weekend Coordinator, then hopped over to NCI where he currently serves as the Facilities Chair. He has served both boards extremely well in both positions and we thank him for his expertise and leadership. However, he is now ready to try something new and will be taking over as President of Nature Camp, Inc. when the magnificent Katie Hoffman concludes her two terms this November. Join us in expressing our gratitude to Katie for the amazing job she has done these past six years, and welcoming Corey to his new role – he will do a great job leading NCI forward!!