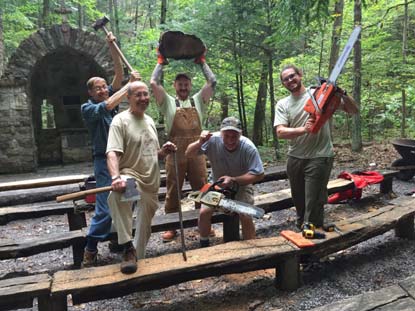 Fall Service Weekend 2018 was decidedly unusual. In the week leading up to the scheduled time of September 14-16, Hurricane Florence appeared to be on track to dump about 10 inches of rain in Vesuvius on those days. Widespread flooding and power outages were expected all over Virginia.

The emails flowed furiously as the storm track and predictions varied and possibilities were considered. Finally the combined Boards of the Nature Camp Foundation and Nature Camp, Inc. decided that we would cancel the regular Service Weekend in the interests of safety and sanity.

Immediately, there was a second flurry of communication to try to arrange what we expected to be a Florence Clean-Up Detail. Three future weekend options were thrown out to the community and the best all-around response was for the following weekend of September 21-23. Critical to that choice was the availability of a cook! Reid Downer volunteered to head up the kitchen with the help of Jeff Pool and Wilson Ratliff. An army (even a small army of volunteers) marches on its stomach! Thank you, gentlemen!

Twenty-four volunteers came for our makeup weekend and we found a suprising LACK of storm damage. Vesuvius had received just a little more than an inch of rain in the previous weekend and wind had not left a huge mess. Nevertheless, there was plenty to do!

Several weddings were booked for fall dates including the very next weekend, so Camp needed a thorough cleaning. The Chapel received new benches and gravel was redistributed to smooth the drip-line and gulley to provide a pleasant path for the bride to tread down. The LS, T-houses, and bunk houses were “spiffed” up and the very musty mattresses were all cleaned and aired.

Along the right side of the driveway into Camp, a new ditch was created to keep stormwater headed towards the creek without crossing and eroding the driveway.  Now a cute little bridge over the ditch marks the beginning of the trail to Buttermilk Springs.

A window was rebuilt. Doors and drawers were rendered easier to open and close. Trails were cleared of autumn olive and downed trees. Music was played and delicious food was shared!

Come join us next time.  Spring Service Weekends are always the third full weekend in May and Fall

Service Weekends are the third full weekend in September.  Mark your calendars and join the fun!