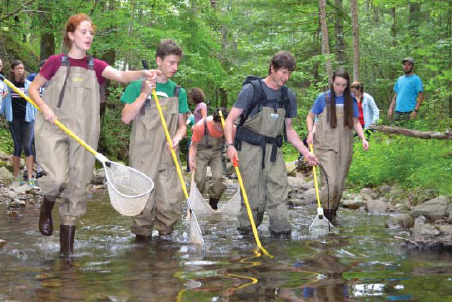 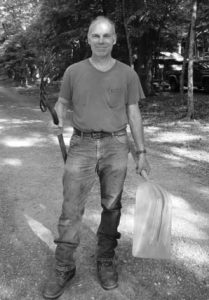 We bade a sad farewell to caretaker Gary Barker just before the summer began. Gary came to us four years ago this fall and quickly proved himself a valuable and valued member not only of the staff, but of the Nature Camp family. His legacy will persist in many tangible ways, not the least of which is the handsome wall he built by hand behind the Gus Deeds Memorial Pavilion two summers ago. Gary has returned to North Dakota to work at a school, and we wish him well in his new adventures—and we hope that he’ll visit us from time to time! The acuteness of Gary’s departure was lessened somewhat by the unexpected but welcome return of former caretaker Charlie Truxell, who came out of retirement to fill in for the summer. It was delightful to have Charlie back with us, and he picked up right where he left off. He constructed a storage rack for the myriad guitars and other stringed instruments which find a home in the L.S. during the summer, helped design a new system for covering the swimming pool for the winter, and was instrumental in managing to move our new reach-in refrigerator and freezer into the pantry. (More on those later.)

At the beginning of Fourth Session, new permanent caretaker Ventry Smith arrived, and he and his wife Sheryl are now settled into the house on the hill, a home in which Ventry first aspired to live nearly four decades ago. Welcome aboard and welcome home, Ventry; we look forward to having you with us for years to come. 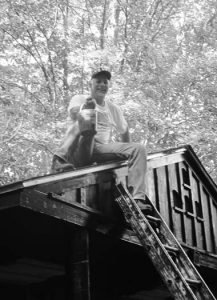 The new appliances in the kitchen, generously funded with a grant from the Nature Camp Foundation, immediately improved food storage, making leftovers more accessible and increasing capacity for produce, meats, and dairy products in the walk-in. It was a bit of a spatial challenge to get them in place, but the staff eagerly answered the call, as they did so many times this summer, for “able-bodied counselors” to perform manual labor. Although it was not a particularly hot summer (we even had a few mornings in the upper 40s during First Session), the cooks greatly appreciated the new wall-mounted fans in the kitchen, as well as the additional intakes for the attic exhaust fan. And campers and staff alike made use of several new microscopes, sampling nets, and other educational equipment, all furnished as well through the magnanimity of NCF members.

Although it’s hard to say just what the most popular meal was this summer (all the food is good, and so many dishes rank among the favorites of the campers), the most popular major classes were mammalogy and herpetology, and “MTA” claimed the distinction of the most requested song before evening program, especially toward the end of the summer. Sunday hikes explored White Rock Canyon and Irish Creek for the first time in several years, and Environmental Philosophy returned to the curriculum after an absence of two decades. The first Thursday of Third Session marked the 75th anniversary of the first day of the very first session of Nature Camp, and we celebrated the occasion with ice cream sundaes, an embodiment of “75” on the playfield, and a retrospective slide show in the evening. And as we continue to celebrate this historical milestone, we look forward to the next 75 years of Nature Camp, including the upcoming and exciting renovations to the Education Building. Many thanks to all of our supporters for enabling us to get to this point and for creating and maintaining a structure that will allow Nature Camp to continue to thrive for generations to come.