Every so often, one of those moments hits when you think, “Wait, why didn’t we think of that?” or “Why haven’t we done that before?” So it is with this year’s inductee to the Nature Camp Roll of Honor, which was established in 2003 by the former Board of Trustees to recognize significant, non-monetary contributions to Nature Camp. Our single honoree for 2016 has made a lasting impact on Camp in myriad ways over the course of more than four decades. Walter Mehring spent four years as a camper in the late 1950s, but he was never quite hooked by the experience. When his brother Peter served as director of instruction during Brent Heath’s tenure as director, however, he convinced Walter to join him on staff, and Walter returned for the first two years of Colonel Reeve’s directorship—and no doubt exasperated Colonel just a little bit with his teaching of Wilderness Living. Walter himself recorded for posterity the adventures his class had during their overnight camping adventure in Amherst County during First Session 1973:

“The classes … gathered more than enough greens for supper—stinging nettle, violets, Indian cucumbers, and, sigh…numerous daylilies. We killed two copperheads and caught a number of small fish which added considerably to our meat supply. We gathered around two fires to keep warm and built a lean-to and throughout the night alternately froze and slept or huddled around the campfire, warm but awake. It was all very exciting. You were never sure whether you were going to be stepped on by a person changing from one position to another. Early the next morning our heroic fishermen caught twenty more fish, which, together with a few mulberries and Indian cucumbers, were our food for the day. The lack of food and sleep left us quite tired so we spent the day torturing one another in the most delicious terms imaginable.” 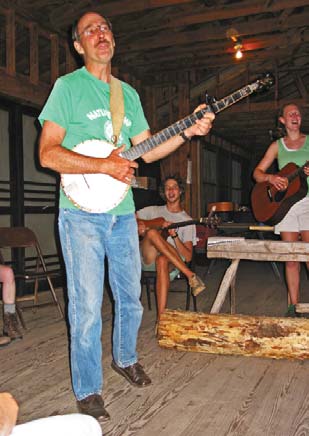 The previous summer, so the story goes, as heavy rain from the remnants of Hurricane Agnes kept everyone indoors for several days, Colonel was awakened from his afternoon nap by someone pulling on his toe. He looked up to see Walter and Lisa Rossbacher standing by his bed. Walter was grinning as he asked, “Wanna hear a new Camp song?” Walter had composed music that fit perfectly the words to Lisa’s poem, and thus was born “Thinking of Tomorrow.”

When the Nature Camp Foundation formed in 1989, Walter became the first chair of the Service Committee and for several years organized the semi-annual Service Days. (Full weekend events were not held until 1997.) He remains a faithful and tireless participant at these gatherings and has helped make numerous benches for the chapel and outdoor classrooms. Walter has also served as an instructor at Adult Session ever since this event was reinitiated in 1990; his sessions on such topics as early American tools, primitive instruments, and making Tarahumara running sandals are invariably among the most popular offerings every year.

Last year Walter played an instrumental role in the construction of the Gus Deeds Memorial Pavilion. It was he who initially had the idea to incorporate the white oak that had earlier been felled near the swimming pool, and along with Lyt Wood, he spearheaded the engineering effort to move it to the playfield. This tree provided the rafters for the pavilion and two of the benches inside, and Walter generously donated some additional wood from his own stock of lumber, including the walnut which he carefully crafted into two additional benches.

Whether cleaving an oak log with a froe or entertaining a crowd with the story of “Paddy and the Bricks” with his banjo in hand, Walter continues to make an immeasurable, invaluable, and memorable contribution to Nature Camp. Forgive us the oversight in failing to include you sooner, but we are proud to induct you into the Roll of Honor as the lone member of the class of 2016. You’re one of a kind, sir, and we gratefully salute you!