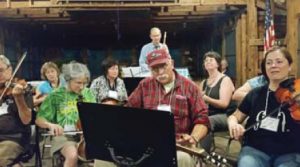 The 2015 Adult Session of Nature Camp was titled “Subtleties of Nature” but there was nothing subtle about the response to Adult Session 2015. My “Roster of Participants” included 74 names, which I believe was a record attendance. And a lot of folks (approximately 40) were still there on Tuesday morning enjoying camp till the last possible moment. Just a few years ago I can remember when everyone at breakfast on Tuesday could eat at one table. Not so now, campers are reluctant to leave the new friends they’ve made and old friends they’ve re-connected with over the weekend. Another indication of record attendance was the crowd that enjoyed the field trip on Monday. There were lots of folks out enjoying the Humpback Rocks area and less invigorating hikes through the beautiful Blue Ridge. During the weekend I remarked to Flip Coulling, the camp director, that it looked like Adult Session had hit the big time and I’ll stick to that remark. Just the size of the group was exciting and my activities just added to the pleasure.

I camped out for the first time in Adult Session, setting up a two-person tent near Big Mary’s Creek behind the chapel. It was nice to have my own little home to go to in the evening after late night music or, in one case, early morning music. I’m told everyone still in the bunkhouse enjoyed my tenting even more than I did (Editors note – Mike snores!!!). There were two other small tents along Big Mary’s and one over along the path to Buttermilk Springs. Everyone looked cozy. Oh, yes, Theta Miller had a tent she picked up from a sale at Barnum & Bailey’s used circus equipment on the athletic field. Quite the tent, Theta!!

My third experience with the camp string band was by far the best. Music has become such a big part of my adult session that I sometimes think of it as a music camp with natural overtones rather than the other way around. This year the band performed “Cripple Creek” (cloggers appeared on the dance floor to the rousing rendition) and “I’ll Fly Away”. Fun for all including the camp caretaker, Gary Barker, who, as a new fiddle player in the band, was inspired seeing the joyful dancing to the music. Thanks to instructors Marc, Michaux, and Molly. 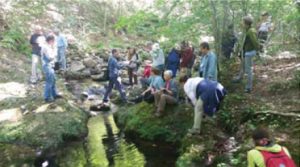 When I wasn’t sleeping or strumming, I spent some of my time making a semi-precious stone necklace (Nell Fredericksen) and learning the gemstones of VA, fermenting some sauerkraut and kombucha (Katie Hoffman), and making a pair of Tarahumara running sandals (Walter Mehring). I learned about some of the processes that formed the rocks around camp (Maggie John) and why the asters are such a successful plant group (Julie Moore). Many aster flowers are actually many flowers posing as one, with their familiar rays enticing the pollinators in to walk all over the central disc which is made up of many flowers that are less expensive to plant resources. Learning such things is just part of a wonderful weekend. Camper Stacy Luks educated me about a fig variety called the Hog Island Fig. And there are always those lectures and walks that one cannot enjoy because you’re already doing something else. One of the biggest challenges of Adult Session is always choosing what to do and what you’ll have to do “next time”. A second challenge to this writer is remembering and relating all the inspiring conversations and experiences one has during the weekend.

And, of course, adult session is primarily a wonderful camp family, one that welcomed several new members this year with open arms and hearts. Flip was most pleased by “Not only how many new people we had but how easily they became part of the camp community”. Jerry Trammel said, “I especially enjoyed adding new geology and fermenting to my knowledge base.” First time camper Liz Halford told me “Great camp! Everyone is intelligent and smart and people come here every year to add to their knowledge.“ We come for the wonderful hugs and smiles from our fellow campers. Camper and lecturer Gerald Pottern had my favorite quote “The good thing about the August Adult Session is that we only have to wait 10 months before the next one in June.” In the meantime I’ll be enjoying Fall Service Weekend, the Fall Hike Day, and Spring Service Weekend with some of my favorite camp family members. Come join us.

Editors note: Thanks to Mike Tabony for sharing his Adult Session experiences with all of us!!!