The Founding of the Foundation – Ben McIlwaine’s Birthday Party 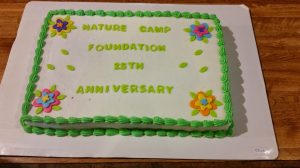 Honoring the Past and Thinking of Tomorrow: The Nature Camp Foundation Celebrates 25 Years

Who could have known twenty-five years ago that Ben McIlwaine’s fortieth birthday would have such positive consequences for Nature Camp?

In pulling together the material for this article, I was once again impressed by the imagination, energy, and hard work that Nature Camp inspires in the folks who are associated with it. It turns out that the idea of a support organization for Camp came about because Ben McIlwaine, a camper from the mid-1960s, was feeling nostalgic about his Nature Camp days and wanted a special fortieth birthday present: a reunion in Vesuvius with some of his Camp friends. Ben and Mary Tiffany Schweitzer (Latham Schweitzer Coates’ mother and Ben’s contemporary) began compiling addresses and contacting as many of their fellow Campers as they could find. The friends gathered at camp to celebrate Ben’s birthday and reconnect. As they convened at Camp in June, 1989, the members of this group decided that they wanted to do more than just reminisce; they wanted to play a part in making sure that Camp would remain open and stable for generations to come.

Connie Sancetta and Zia Howell McConnell remember that Colonel Reeves was at Camp during the festivities. The group asked him for his opinion regarding something significant they could do in support of Camp. Colonel suggested that they create an alumni organization, pointing out that there might be a need in the future for some assistance, especially financial, as the Virginia Federation of Garden Clubs was seeing a decrease in the numbers of women joining their ranks. An alumni foundation might be just the ticket, Colonel suggested, for keeping people connected to Camp and to each other, while offering financial support when the Garden Clubs had larger-than-usual budgetary needs. His concern was that the Garden Clubs, as generous as they were, couldn’t continue to maintain Camp forever—at least, not without some help.

This enthusiastic crew took Colonel’s suggestion and went away inspired. Connie says that Tom Wieboldt, another of her contemporaries, told them about another group of dedicated former Campers and staff who held regular reunions. That group included his wife, Ali Davenport Wieboldt, who had been at Camp a few years after Tom and Connie. The two groups merged, bonded by their mutual enthusiasm, and pooled lists of contact information. They also researched the best ways to organize into a more formal organization. Connie, one of the founding members of the NCF board, explains that “the very first board was [composed of] self-defined volunteers; pretty much anyone who was willing to put in some effort signed on and we created positions to correspond to their interests.”

After working individually, the volunteers again met at Camp and doled out jobs to willing volunteers. Connie Sancetta and Arthur Mizzi drafted by-laws. Chap Goodwin, an attorney and a former Camper, agreed to do all of the work to set up such legal documents as the articles of incorporation. Zia Howell McConnell began the detective work of finding people who might want to be part of the effort. According to Zia, “when [the group was] first trying to reach people and could only think of getting in touch using people’s addresses from old Woodland Echoes, it was really a BIG job to synthesize the years of newspapers we had and then match those people who attended multiple years. I remember nights of sitting on the floor in my living room with issues of the Woodland Echoes spread out before me like a quilt…I really learned a lot about Virginia and the various places Camp people lived. I mailed many a ‘search’ postcard from the beach during my vacation, and it was such a thrill when we ‘found’ another person who was interested in reconnecting!”

In order to keep all of these members involved and interested, there needed to be some hands-on activities— especially some that would allow them to come back for visits to Camp. Ali Wieboldt and Dot Spates Wilbur (now Brooks) came up with the idea of offering adult sessions, patterned on what Colonel had done in the 1990s. These would be different from the earlier sessions, in that invitations to participate would be issued not only to the Garden Club ladies who had been on Colonel’s early lists, but also to Nature Camp alumni and friends. Connie cites these newly configured adult sessions as one of the most important and enduring legacies of the early days of NCF, along with Walter Mehring’s idea that members of the Nature Camp Family should be invited to come to Camp and work on the many tasks that would help keep the buildings and grounds in good shape. This, of course, was the inception of what grew into our twice-a-year service weekends.

The first issue of the Afterglow comprised part of the NCF’s initial organizational efforts. Connie says that she remembers it as a two-page document, one page contributed by her and another by Gerry Wass, each of them remembering their respective reunions. Even more importantly, this issue of the Afterglow invited people to participate, announcing the group’s intention to support Camp through some form of an organization. The response was very positive.

“Recruitment letters went out to parents’ addresses, because that was all we had,” Connie recounts. “One of the major impacts of those efforts—the most broadly spread—was that so many people who had had their lives changed by Camp received these letters and came forward either to volunteer or give money. [The volunteers’ efforts] allowed people to regain contact with each other and to see how the values and ideas that we learned at Camp had continued to influence our lives. Coming together let us see what everybody was doing– how they had put what they learned at Camp into practice.”

I was one of the folks who answered their call. Newly married, I had just moved to East Tennessee when Connie reached me and asked whether I might be interested in working with the newly formed Nature Camp Foundation. Pleased to be invited and thrilled to have the chance to work on behalf of a place that had made so many positive changes in my own life, I readily agreed to do what I could to help. Like Connie, I remember the pleasures of getting to know so many people who had been at Camp before me and of hearing about how Camp had figured in their lives. I also remember being impressed and inspired by the sheer number of interesting, talented people who wanted to see Camp prosper; this is something that I’ve had the good fortune to witness many times over the years, but that was my first glimpse into what Nature Campers were like when they were all grown up.

According to Ali, Kathy Harris took the lead in designing the Nature Camp Foundation logo, and Ali gave her a hand. Ali’s memories of the early years of the NCF include the first adult sessions, at which she taught every year until recently. Ali’s daughter, Elsa, who is now at Roanoke College, was born in March and came with Ali to adult session the summer following. “I remember bringing Elsa with me in her pack-and-play crib,” Ali remembers. “She was a Nature Camper from the very beginning!”

In summing up some of the best things about her experience as one of the members of the first NCF board, Zia declares that “it was really fun coming back to Camp. I remember the idea of adult session coming into being, and thinking, ‘Yes! I get to go back to Camp!’ It was wonderful!” There was another positive side effect of her involvement with the efforts, too. “One of the best things for me,” Zia wrote in an email, “was that since I am the last of 5 children and all my brothers and sisters attended Camp before me, I met several of my siblings’ Camp friends — which was so great! I heard lots of fun stories about my brothers’ and sisters’ Camp years, which was a window into their lives that I had not known before. Many of the stories were also good blackmail material for when we all got together.”

As the first NCF board met at Camp and began to formalize their work, there were a number of challenges. Connie remembers some of the more interesting moments this way: “We went along for several years raising money and doing adult session. It wasn’t clear to the Garden Club ladies what we were doing, and really, it wasn’t always clear to us. At first, I think they were a little nervous about just what our intentions were. I think it was actually the money that won them over, at least partially. They realized that we were helping them financially in an important way, and that we weren’t going to interfere in how they were running Camp. A few years after we began, when Barbara Ohmsen was elected president of the VFGC Board, she dove in and learned all about us. She was very enthusiastic, and she embraced our help. I think that really put us in good stead with the rest of the VFGC.” The NCF still allows us to find and visit one another. Zia says that, on a recent business trip, she made a side visit to a fellow Camper who lives in Arizona. She regrets living so far away that it’s hard for her to make it to service weekends, but, she declares, “I cannot wait for the 2015 reunion, and I love keeping up with what is going on via the Nature Camp Facebook page.” The NCF continues to support Camp in other ways as well. Its most visible current works are publishing the Afterglow and hosting our two service weekends each year. Along with encouraging numerous alumni, staff, and friends to participate in the fun and fellowship of working at Camp on those weekends, the NCF also continues to raise funds and provide money for improvements in Camp’s infrastructure. Examples are a recent well replacement project and the purchase of new equipment for the kitchen this past summer.

We have a lot to thank the Foundation for, since for twenty-five years it has managed the fundraising and friend-raising that help keep Camp in good physical and financial shape, along with keeping us connected through such publications as the Afterglow, the NCF and Nature Camp web pages, and the NCF and Nature Camp Facebook pages. Here’s to Ben McIlwaine and the fortieth birthday celebration that started it all. While I’m at it, here’s to the talented and dedicated people who made the first efforts to form the NCF, to those who are currently volunteering their time and talent, and, thinking of tomorrow, to those current campers and staff who will pick up the mantle in the next twenty-five years and beyond.