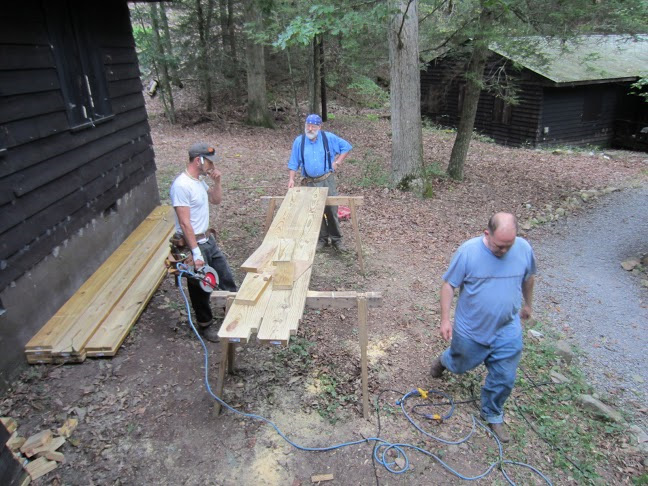 We always figure that it will rain whenever we are reshingling a roof at Camp, but in May of 2013, the rain was more of a pain than usual. After stripping the old shingles from the roof on Thursday, the rains started. 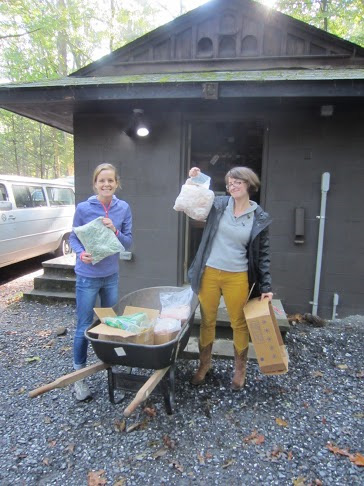 We pulled tarps over the roof, but of course our tarps have been used for collecting leaves and brush, and shingles and roofing nails that fall from the edges of the roofs. They are no longer waterproof. Before we could haul out the large piece of plastic we already had rain water pooling on the top of the ceiling sheetrock in the outer office of the Staffhouse. We used towels to mop the water from the top of the sheetrock, but the water was already pouring through the holes in the sheetrock where the fluorescent light fixtures were secured.

Should we replace the wet sheetrock, or hope that it dries before it sags and falls from the weight of the water? Tony deserves the hero award for this weekend for making that decision for us. He stepped through the ceiling sheetrock while working in that attic. See if you can find a Tony?sized hole in the ceiling sheetrock in the photos of the weekend. Contractors were hired to remove and reinstall the ceiling sheetrock before Camp resumed in June, because we didn’t have enough time to do it ourselves.

The back half of the Staffhouse that parallels the road is the part of the roof we were reshingling in May. Over the years, additions to this building have resulted in some roof changes. We used a lot of galvanized flashing to slow the rotting of the wood in these areas. The roofing project during the September 20?22, 2013 was much simpler than most of what we have done in the past. We reshingled the front of the Staffhouse. You might have noticed that the front of this building has 3 sections with no valleys or vent pipes. There was step flashing on both sides of the raised roof section that extends over the porch. We expected rain, so as we stripped one of the sections on Thursday, we searched for broken nails, replaced rotten wood, and added drip edge and roofing felt, before moving onto the next section. This technique allowed us to finish that roof by Friday afternoon. 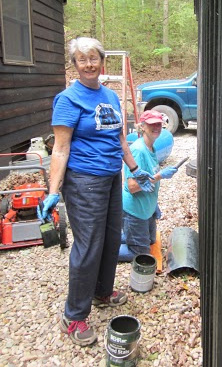 Brett deserves the hero award for the September Service Weekend for leading his crew to finish reshingling this roof so rapidly. That afforded us the opportunity to finish a number of other projects that have been on the projects list for quite some time. It started raining shortly after the shingles were on and rained throughout most of the rest of the weekend. Thank you to Dave, Flip, Lyt, Mack, Matthew, Mike, Paul, and Ventry for arriving on the Thursdays to strip the old shingles from the roof.

We sistered 59 floor joists under the GBH, and sistered 11 more under the sick room of the Infirmary at the 2 Service Weekends. Thank you especially to Mack who hung in there while we figured out what to do under the Infirmary. The situation was different under there from the bunkhouses. There was no center beam in that section of the floor, so both ends of the joists had to be notched over a block wall. That added a great deal of time and grunting to the installation of these 11 joists. Thank you to Barak, Bob, Chuck, Dave, Jarrod, Jason, Jerry, Jesse, Jimmy, Kate, Mack, Mark, Mike, and Sandra for helping under one or both of these building for one or both of the weekends.

In April, Charlie hired a contractor to install the concrete base for the new flagpole. During the May Service Weekend, a group of folks stood and secured the new flagpole. We painted the outside of the Canteen, inside the BTM, and inside the AD quarters. We stained the shed at the Caretakers’ house to match the other Camp buildings. We put the first coat of concrete stain on the two T?house floors.

These will each need another coat in May 2014. Walter taught several folks the art of hand?hewing benches. We hauled loads of leaves and brush. We removed the ivy from the Chapel to check for mortar deterioration. We started removing the very old Museum samples from preservative and from the display cases. This is the first step in making the Museum a more useful space. We installed 2 ceiling fans in the Coed Counselors’ room, and generally got Camp ready for the summer sessions and then for a long winter’s nap.

Art Maguire has volunteered to direct folks to the various tasks that need to happen during the weekend. This has worked very well, and I appreciate his help. Amy K Gonzalez has invited you to look at her photos from both of these weekends. Amy has the photos posted at the following websites. She spent loads of time gathering names, and for this I am extremely thankful. I spent a good deal of my time under the GBH or Infirmary, so didn’t get a chance to see everyone who attended. I could not have compiled the list of attendees without Amy’s and Art’s diligence. 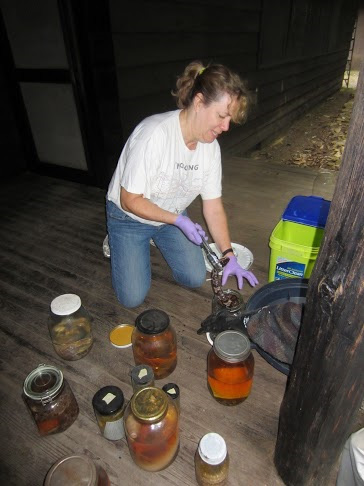 I hope we are all lucky enough to again cross paths with Charlie and Priscilla who retired to Florida after the September 2013 Service Weekend. I would also like to say thank you to all of you for your support over the many years and hope you will support Ventry and Art in the years to come. Ventry Smith will take on the position of the Director of Facilities on the NCI Board and Art will continue in his roll as Service Weekend Coordinator, but will also become a voting member of the NCF Board.

Although I have attended 51 of the 52 Service Weekends, I was not the first NCF Service Committee Chair. That credit goes to Walter Mehring, who coordinated the Service Weekends for 6 years and made it easy for me to continue.

Please share any other digital photos you may have taken with Amy KG, or Michaux, the Webmaster, at http://naturecampfoundationorg/.

The Nature Camp Foundation and Nature Camp, Inc., with heartfelt warmth and fondness, thank Jim Brooks for his immeasurable loyalty, time, energy, expertise, and the sheer joy of his presence in our midst.