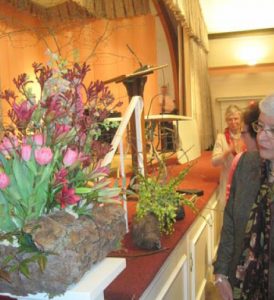 Well, it was that time of year again, to spend time with the ladies who lunch. Very powerful, productive ladies, who have supported Nature Camp through thick and thin. I’m speaking of the Richmond Council of Garden Clubs annual Fashions with Flowers annual event, held at the Ginter Park Woman’s Club on February 17th. The decorating theme this year was “A Day at Nature Camp” and the centerpieces reflected this very naturalistic approach. One arrangement even had a live fish swimming in the middle!

The floral design program “Natural Interpretations” was by David Pippin and the fashion show was sponsored by Steinmart. Members of Richmond Council clubs served as fabulous models and an appetizing lunch was served by the Ginter Park Woman’s Club. As usual, the place was packed. A silent auction was held with items donated by members, local businesses and our own Shirley Napps and Katie Hoffman. The stunning arrangements created during the floral design program were raffled off. Not a single opportunity to gain more cash was wasted by those enterprising women!

Jane VanDenBurgh heads up the event and she wrote: “We of RCGC are excited and honored by the establishment of the “Richmond Council of Garden Clubs Scholarship” and we will continue our enthusiastic support of Nature Camp.” Last year, the grand total donation to camp from this event was over $3000. Did I mention this was the fourteenth annual luncheon? For the past two years this event has generated more than $3000.00 for Nature Camp.

Lynne Still has been the Nature Camp Incorporated liaison to the garden clubs, serving as the scholarship chair. She was asked to speak about camp at this year’s Fashions with Flowers and she included me on the agenda, to speak about Adult Session. Lynne explained the new Richmond Council of Garden Clubs Scholarship and then announced the induction of four Richmond Council members into the Nature Camp Roll of Honor.

Here are some of her notes from that presentation: “You may know that Nature Camp has, in recent years, revived the tradition of periodically honoring special friends of Nature Camp as inductees to the Nature Camp Roll of Honor. Those included have made significant non-financial contributions that have strengthened Nature Camp for future generations of young people. For example, while we remain deeply grateful to the Richmond Council – really, to all of you here today – for holding this annual event that represents so much hard work and generosity and that results in a greatly appreciated financial contribution, we know that ongoing collective support often stems from the commitment of a smaller group of individuals. How fitting that such great support comes from garden club members, who well understand that the seed of an idea can grow into something real and substantial. I would like to honor 2 individuals posthumously. Pat Brewster had the vision to start this event years ago to support Nature Camp. Each year the event has grown and sells out almost immediately. I know that it is an event that I look forward to yearly. And more recently, Linda Simon became a vigorous supporter of Nature Camp when she was President of Richmond Council. She was a strong supporter even though she never even saw Nature Camp. Many of the Camp’s current volunteers never got to meet Pat or Linda; they feel their loss nonetheless and will recall their names with gratitude because of their commitment to shared ideals. Two more individuals I take great pleasure in honoring are Jo Casler and Martha Saunders. When Jo was President of VFGC in the late 1980s her tenure overlapped with the establishment of the Nature Camp Foundation, of which she was an enthusiastic supporter. She also served for many years on the Nature Camp Board of Trustees. Martha was the treasure of Nature Camp for 10 years. Both Jo and Martha are fierce and loyal advocates for Nature Camp and became involved with Nature Camp because they understood that the seed of an idea could grow into something real and substantial. Over the years they have remained steadfast supporters of Nature Camp and their support for the mission of Nature Camp helped channel the talents and enthusiasm of you, their friends, into very real support for Nature Camp. These 4 individuals’ names will be added to the Nature Camp Roll of Honor plaque that hangs in the office of Nature Camp.”

Jo Casler and Martha Saunders were surprised and pleased to be recognized in such a way, and it was an honor to pay tribute to their support. I look forward to Fashions with Flowers XV. Won’t you join me? But make your reservations early – that thing sells out quickly!!