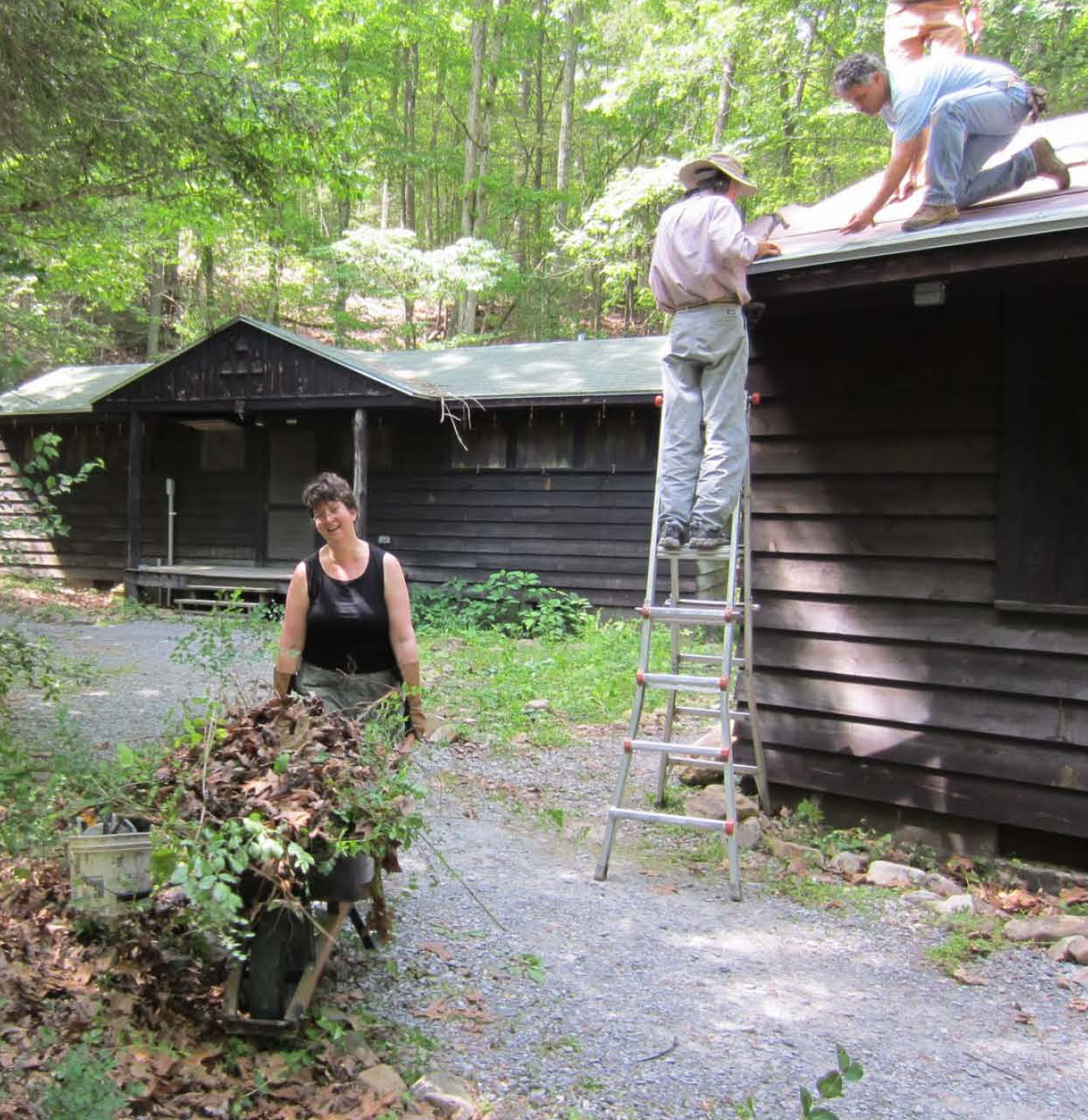 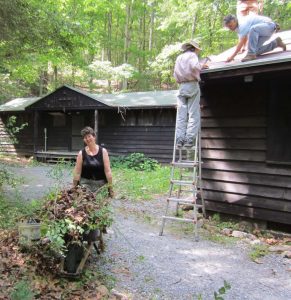 The dining area of the LS was trashed when we arrived for the May 17-20, 2012 Service Weekend. Everything from the kitchen and pantry had been moved to the dining area for the renovation of the kitchen. During the winter, much of the subfloor in the kitchen was gone, so rats had ready access to all parts of the LS. They took advantage of the opportunity and made a mess of the food in storage containers, the dishes, glasses, cups, flatware, pots and pans, tables, shelves, and chest freezer. The kitchen crew, with loads of help from other volunteers did a wonderful job of scrubbing everything and getting it back into the kitchen and ready for the regular sessions of Camp. The new Champion dishwasher was not yet up and running, so all the dishes, pans, and everything else had to be washed by hand. Charlie had done a great job getting the sinks and stoves back into the kitchen and functioning before we arrived for the weekend. The new kitchen looks wonderful. There is a new tile floor throughout the kitchen, back hall, and pantry, a new sheetrock ceiling which has been painted black, and new lighting. There is also stainless steel on the wall behind the Champion dishwasher. A small crew of folks installed 1”x10” pine boards and trim around the inside walls of the kitchen during the Service Weekend to cover the open studs. It all looks really sharp.

In spite of the turmoil in the kitchen, the food was excellent. Pizza was on the menu again, because the stoves were back in the kitchen and functioning. There were 13 pizzas. Nell headed the kitchen crew with much help from Penny, Amy, Art, Cathie, Fabienne, John (who always seemed to be washing dishes), and Theta.

In addition to the kitchen, we had several other projects. We finished reshingling the BBH. We framed and poured a concrete step in front of the door to the room behind the Garage. We pressurewashed and repainted the pool deck. We installed a landscapeblock pad in front of the pool house in an area that was perpetually muddy. We replaced some fascia boards on the Garage and Library. We replaced the flagpole rope and the rope to the bell in the Chapel. We hauled loads of brush. We spread some gravel. And we installed 43 floor joists under the BBH. Liam Carr (Mack Carr’s 10 year old son) was lowered via climbing rope down into the Chapel bell tower in order to thread the rope through the ceiling of the room below for access to the rope from the ground.

On Thursday, Charlie had the new (to Camp) white Chevy 3500 1-Ton dumptruck positioned under the eaves on the front of the BBH and Christopher, Flip, Joe, Mack, Matthew, Mike, Oliver, Reid, Tony, and I removed the old shingles from the front half of the building. Except for a couple of overhangs above the windows, the BBH has now been reshingled. We will move on to start reshingling the Staffhouse in September 2012. It will likely take 3 Service Weekends to complete the Staffhouse roof. 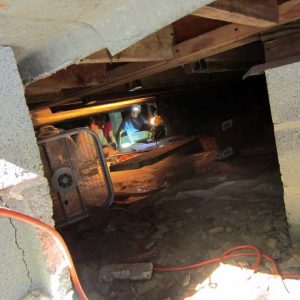 A great many of the 60-year-old floor joists in Camp are dry-rotted to the point that they can be pulled apart by hand. We started by sistering a new pressure treated 2”x10” next to the existing white pine 2”x8” floor joists in the GBH in September of 2011. We only repaired a quarter of the GBH, because the floor in the BBH was sagging more than the remaining sections of the GBH. This past May, we repaired half the BBH floor joists. In September of this year we will repair the remainder of the BBH floor joists and go back to the GBH next spring. After that, we will move on to all the other buildings that have suspended floors, until all the buildings have new joists. If the bunkhouse floors are sagging, it won’t be long before the remainder of the floors in Camp are sagging as well. It is easier to fasten a new joist in place with a flat floor than with a sagging floor. Eight of us, Alia, Chris, Dave, Liam, Mack, Reid, Walter, and I worked under the BBH. Some of us were under there for 15 hours that weekend. We had 24 new boards to start, but moved so rapidly Saturday morning that we bought enough to finish half the building. With the new wood, the floors are now stronger than they were when the buildings were new.

The hero of the weekend would have to be Ventry, who arrived on Sunday a week early and left on Sunday after most folks were gone. He helped Charlie a great deal to get Camp ready enough to have a large group of volunteers. He also had 7 other members of his family there during the Service Weekend.

Art Maguire has volunteered to direct folks to the various tasks that need to happen during the weekend. This has been a frustration to me, and many volunteers, over the years because I am usually on a roof or under a building and can’t take the time that is necessary to help folks find projects. Art can usually be found somewhere around the LS, so he is much easier to find, and can keep track of volunteers as they arrive and head them in the right direction. I think this worked very well.

Amy K Gonzalez has invited you to look at her photos from this weekend. Amy has the photos posted at the following website. She spent loads of time gathering names, and for this I am extremely thankful. I spent a good deal of my time under the BBH, so didn’t get a chance to see everyone who attended. I could not have compiled the list of attendees without Amy’s and Art’s diligence.
– Jim Brooks, NCF Facilities Chair