By Corey BashamOctober 1, 2011 No Comments 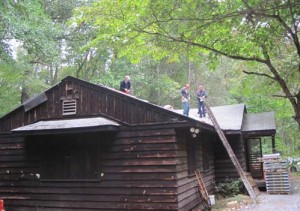 During the Sept. 2011 Service Weekend, the kitchen floor was a major project. We moved most of the kitchen equipment to the dining area and set up the gas range and prep tables on the front porch of the L.S. for a makeshift kitchen. We left the dishwasher in the kitchen until the last minute so cleanup was easier than it would have been without it. It seemed to me that the cooks had more fun than usual, even though much of the scrubbing was done with the garden hose near the water fountain. We couldn’t have pizza on Saturday, since we didn’t have both ovens, but the burrito buffet was a wonderful substitute. The improvised menu planned by Nell and prepared by her and her team: Sharon, Amy G, Art, Penny, and Joanne,was great. It was fun to be smooshed into the dining area of the L.S. with all the kitchen equipment.

Most of the old linoleum was removed before deciding that the entire top level of the plywood subfloor needed to go. Under that layer, several places had rotten lower level subfloor plywood: under the sinks, under the freezer in the pantry, and under the ice machine. The floor in front of the walk-in refrigerator had 2 layers of rotten subfloor. On two weekends since Service Weekend, Flip, Lyt, Matthew, Mike M, Mike T, and I gathered at Camp along with Charlie to prepare for new tile and baseboard. The rotted subfloor was replaced with 2 layers of pressure treated 3/4” plywood. We installed tongue-and-groove plywood in the other areas, and added boards to back up the new baseboard. Charlie did a phenomenal job of getting all the remaining stuff ready for the new floor and baseboard. The kitchen floor now looks wonderful. It has new white vinyl tile throughout the kitchen, back hall, and pantry. Charlie has since put on many coats of wax to make it really shine. It has a new black baseboard around all of these areas. It has 2 sheets of stainless steel hanging on the wall under the windows where the new Champion dishwasher will replace the old Hobart. Although it has not yet happened, the old false ceiling will be removed and replaced with sheetrock, and new lighting will replace the old drop-ceiling lighting. This will happen before the May 2012 Service Weekend, because that is when the counters, stoves, sinks, tables, pantry shelves, and new ice machine will need to be moved back into the kitchen to prepare for the 2012 regular session of Camp. It will be much easier to get this sheetrock ceiling installed, taped, and painted before the equipment is moved back into the kitchen.

We had 2 other large projects to tackle as well. We reshingled half of the BBH and added new floor joists to the GBH. On Thursday, Charlie had a dumptruck positioned under the eaves of the BBH and Ellis, Flip, Joe, Keith, Matthew, Mike M. and I removed the old shingles from the back half of the building. By now, we have many experienced roofers and the reshingling must have gone smoothly, because I didn’t hear any unusual grumbling.

After nearly 60 years, the floor of the GBH sagged. This was due to dry-rotted floor joists. I received a phone call from Charlie the last weekend of 1st session of 2011 to tell me that the GBH floor had sagged. He and some counselors had been able to get a car jack, some cinder blocks, and a couple of 4x4s under there to support the floor long enough to make it through the summer session. Many of the floor joists are dryrotted to the point that they can be pulled apart by hand. Enough of the joists cracked last summer that about a quarter of the GBH floor was sagging. Luckily, there is a 1×6 diagonal subfloor below the 1×4 tongue-and-groove flooring, so the girls didn’t end up in the crawlspace.

During the September 2011 Service Weekend, many folks helped clean under the GBH and get plastic spread over the ground to make our job a bit more pleasant. Then 5 of us (Bess, Bob, Jason, Tony and I) settled in for 9 hours to add new pressure treated 2”x10”x12’ joists next to the old rotten 2”x8”x12’ joists. This is called “sistering” when a new board is added to the old board without removing the old board. We sistered 24 new joists to the old joists. One end of each new joist rested on the cinder block foundation wall on the outside of the building. We used a floor jack, because we were lifting a sagging floor, to lift the other end of each new joist into place and then added a double-wide joist hanger to the old central beam. Luckily, the old central beam that runs the entire length in the middle of the building had not dry-rotted. I don’t know why. There is a total of 88 joists in each bunkhouse that need this treatment. This takes time. We can do a quarter of each building in a weekend, so the project will take 8 weekends. When we are finished, these floors will be stronger than they were when the buildings were new. The quarter of the BBH that is closest to the swimming pool will get the next treatment, since it is the worst of the remaining sections of the 2 bunkhouses.

The heroes of the weekend are Tony Walters and Braxton Worsham, although their task was accomplished a few weeks before the Service Weekend. During closing week of regular session, these 2 guys crawled under all the buildings in Camp that have crawlspaces and looked at every joist to determine the extent of the dry rot. They compiled an excellent list for our future enjoyment. According to their list, both bunkhouses are bad, there are some problems under both T-houses, and there is just one bad joist under the Staff house. The rest of the buildings are in pretty good shape.

Some folks played music in the LS on Friday and Saturday evenings. Of the 69 folks who attended, 17 had never been to a previous Service Weekend and I think 20 folks were on Staff this past summer. I heard someone say that there were only 6 current Staff members that did not attend. We have now had 360 folks who have attended at least one Service Weekend.